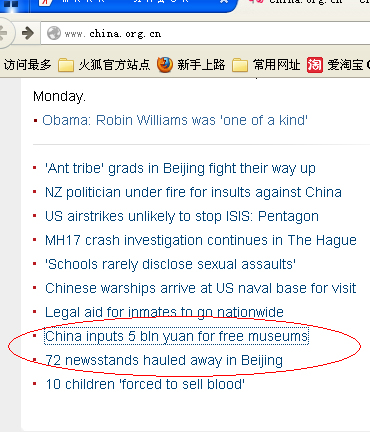 1. The Ministry of Finance said on Monday that it has allocated 4.96 billion yuan (812.62 million U.S. dollars) to support free admissions to museums, galleries, memorials and libraries this year.
The funds for 2014 will keep 1,815 local museums and memorials free, as well as 6,537 local galleries, libraries and cultural facilities.
The figure is almost the same as last year. About 5.11 billion yuan was used to support free admissions in 2013.

2. Seventy-two newsstands have been removed from the streets of Chaoyang district in the capital — and owners fear more could face closure.
Some vendors said their stands were demolished, and a law professor said the action, which was ordered by the Chaoyang district government, broke administrative laws.
However, the district government said the stands were removed because they violated regulations.
Zhao Yumei, a spokesman for the Beijing Newspapers and Periodicals Retail Company, said the 72 stands were removed by force on July 31 and Aug 1.
"All the stands were located in busy sections of Chaoyang district and were built around 1999," she said. "We did not get any notification in advance."
Zhao said the company has stopped sending daily papers to stands in Chaoyang district to avoid losses as it fears more will be shut. Vendors are ready to resort to the law, she added.
Xu Jing has run a newsstand near the crossing of Huizhong Road and Anli Road for almost 10 years, but has been told it must be moved by the end of the month.
The Chaoyang district government said in a statement to China Daily that the stands were not demolished but were moved to other locations as they contravened regulations covering the construction of newsstands.
The statement said stands must be built at least 15 meters from entrances to subway stations and bus stops, and should not be placed on sidewalks less than 5 meters wide, according to a Beijing municipality order.
However, vendors said they were given no formal notification and chengguan — urban patrol officers — and police officers removed their stands by force.
Zhang Jiwei said his stand was "demolished" on Aug 1. He had been told twice that it would be removed, but was given no written notification.
Zhang, who has been running the stand since 2003, said it was placed on a truck by a forklift at 4 am on Aug 1 after officers threw away magazines and newspapers.
"The stand was broken and the door fell off when it was put on the truck," he said.
Yang Xiaojun, an administrative law professor at the Chinese Academy of Governance, said the Chaoyang district government has broken the law.
"Demolition by force should only be used in cases of illegal construction," he said. "Demolition should be carried out according to a legal procedure even if the newsstands are illegal.
"The authorities should issue a written demolition order and the vendors should have a right to appeal, according to the current administrative law."